The leather jacket trend started long before the early 2000s and among these types is the 8-ball leather jacket. You may have seen or heard about the 8-ball jacket in rap lyrics or pop culture as an iconic piece of clothing that comes with a lot of nefarious associations.

This article will talk about everything you need to know about 8-ball leather jackets, why they became notoriously famous in the 90s, and how the issues surrounding them became the reason for their downfall, eventually.

The birth of the 8-ball jacket

The eight-ball jacket was created by San Francisco-based fashion designer Michael Hoban in 1990. It is characterized by its distinctive genuine leather, color-blocking style along with a large black and white decal at the back that looks like the eight ball you see on cue sports and it is somehow a bit similar to a letterman jacket.

This symbolic association of the item along with its high retail price of $800 made it a status symbol for the young and rich people in the East Coast hip-hop scene. With the popularity rise of Hoban’s 8-ball jacket, many counterfeited products were being sold in the market, which led to him creating a licensed diffusion line that produced the lower-end versions of the leather jacket.

The 8-ball leather jacket, also known as the “biker chic” jacket belongs in the costly coats and higher-end category when it comes to leather jackets in the 1990s. The eight-ball design which was particularly famous in the hip-hop fashion scene is associated with winning, misfortune, and risk. It was also said that the term “8-ball” is slang for eight ounces of cocaine which the designer said was unintentional.

The popularity of this leather jacket skyrocketed during this time and it led to robbery, assaults, and fatal crimes– all coat-related. The initial trend and hype for the eight-ball jacket then faded after these incidents and pretty soon, the jacket was met with public disdain. Hoban’s 8-ball leather jacket still remains iconic to this day and can be seen in street fashion as a 90s retro style.

In 2014, a video surfaced on the internet of a guy wearing an 8-ball leather jacket being harassed by a group of teenagers telling him to ‘get his money up’, referring to him wearing a garment that came out in 1990. After the footage became viral online, the guy in the cell phone video, Jorge Pena, lamented that he will have to retire his color-blocked decaled jacket due to the incident.

Where to buy an 8-ball leather jacket

Because of its associations with hip-hop and pop culture, it is still sought after by fashion enthusiasts. A few manufacturers still roll out the iconic 8-ball jacket for people who like to wear clothes ironically.

Today, you can find 8-ball jackets in online stores like eBay and Amazon for more or less $100. Some retail stores like Stussy in North Beach also sell 8-ball designs printed on sneakers or t-shirts for some fans who enjoy high-quality garments. 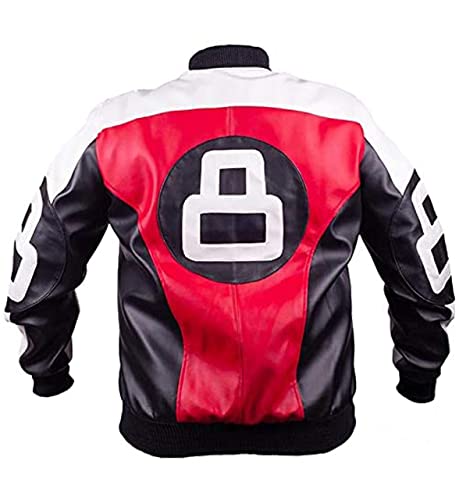 The 8-ball leather jacket by Michael Hoban has become a symbolic piece of clothing in the 90s that still refuses to die down until today. For people who appreciate good quality and retro leather items, the 8-ball jacket is definitely one that is worthy of attention since it has made an impact in the leather fashion industry.

Can I formally dress in an 8-ball jacket?

Sure. That is if you can pull it off properly. It can be a challenge to use a piece of clothing that is designed as casual wear to be worn formally, but nothing is impossible when it comes to mixing and matching outfits. Similar to denim jackets, an eight-ball jacket is best worn casually in a more relaxed setting rather than a formal event.

What kind of designs are available in 8 Ball Jackets?

The colorful design of 8-ball jackets is simple yet distinctive with the decal on the back, and when it was released, it came with various color-blocking styles. However, there are still counterfeit products on the market today that feature unique designs that incorporate the original and iconic 8-ball jacket idea.

Amazon disclosure: As an Amazon Associate, we may earn commissions from qualifying purchases from Amazon.com.

Affiliate disclosure: Some of the links above are affiliate links. This means that, at zero cost to you, we will earn an affiliate commission if you click through the link and finalize a purchase.